CO2 and the Climate Curve

Bending the climate curve won’t be easy. Even with temporarily lower emissions during the pandemic, greenhouse gas concentrations continue to rise. That’s because Earth is like a plugged-up bathtub—slowing the flow doesn’t mean the tub will stop filling.

Air quality is a different story; CO2 stays in the atmosphere for hundreds to thousands of years, while other air pollutants are gone much sooner. We’ll discuss this in a future release.

CO2 levels peak annually every May, as plants in the Northern Hemisphere use CO2 to grow. Once again, this year’s peak will be the highest in human history.

In the first three months of 2020, global temperatures were nearly 1.5°C (2.7°F) above a preindustrial baseline. That’s the second-warmest on record, and close to the “stretch” goal of the Paris Climate Agreement. 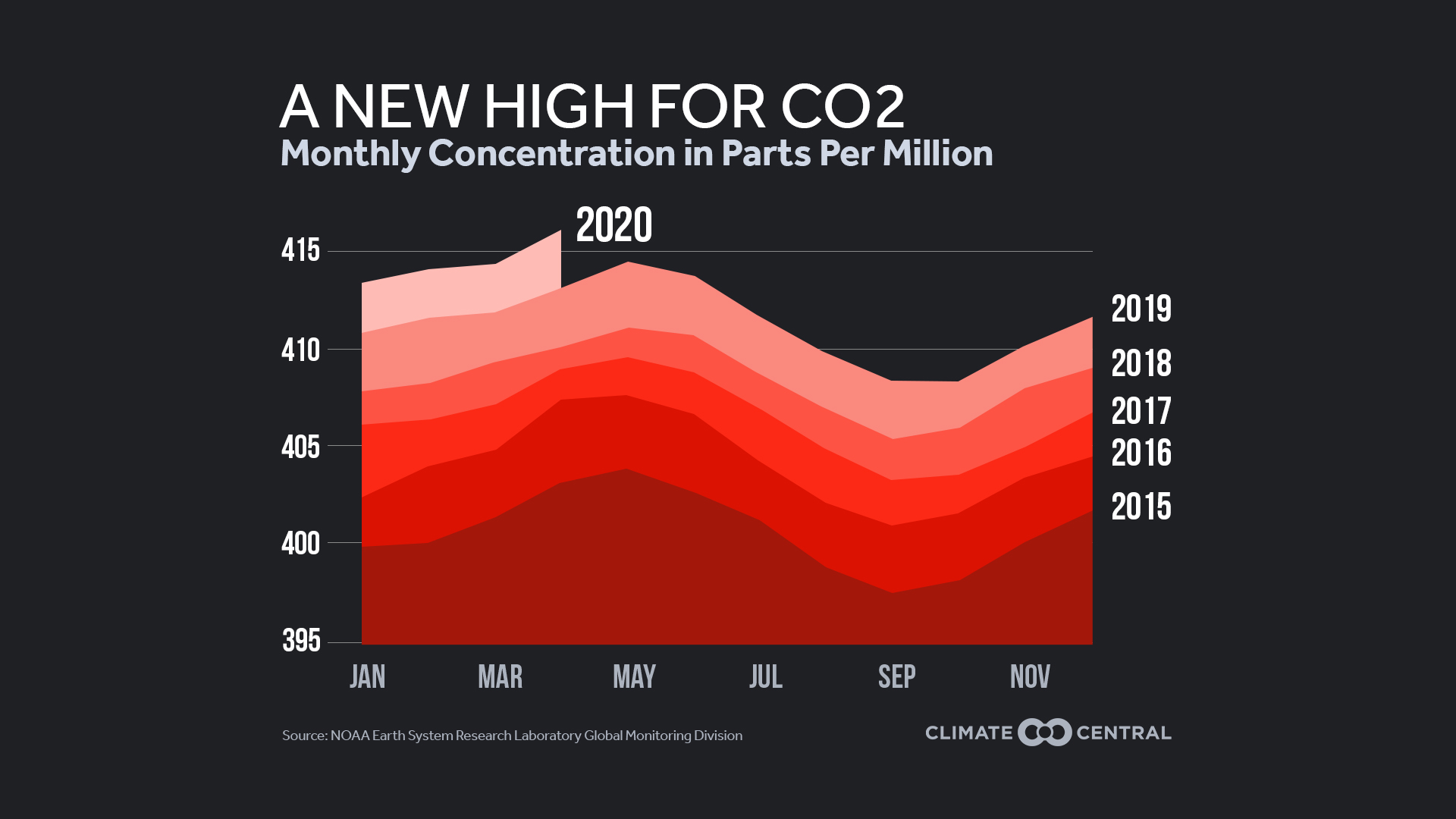 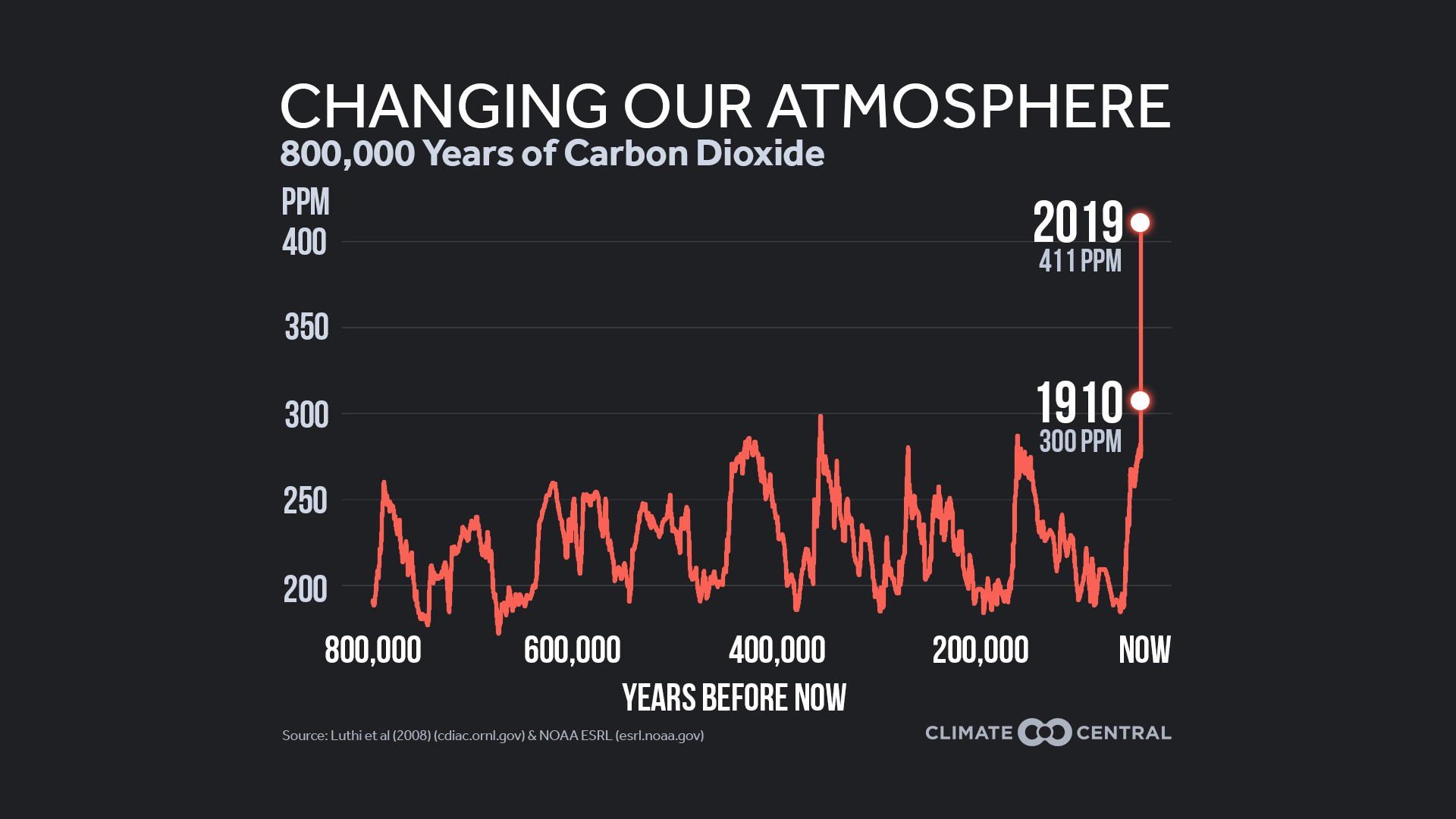 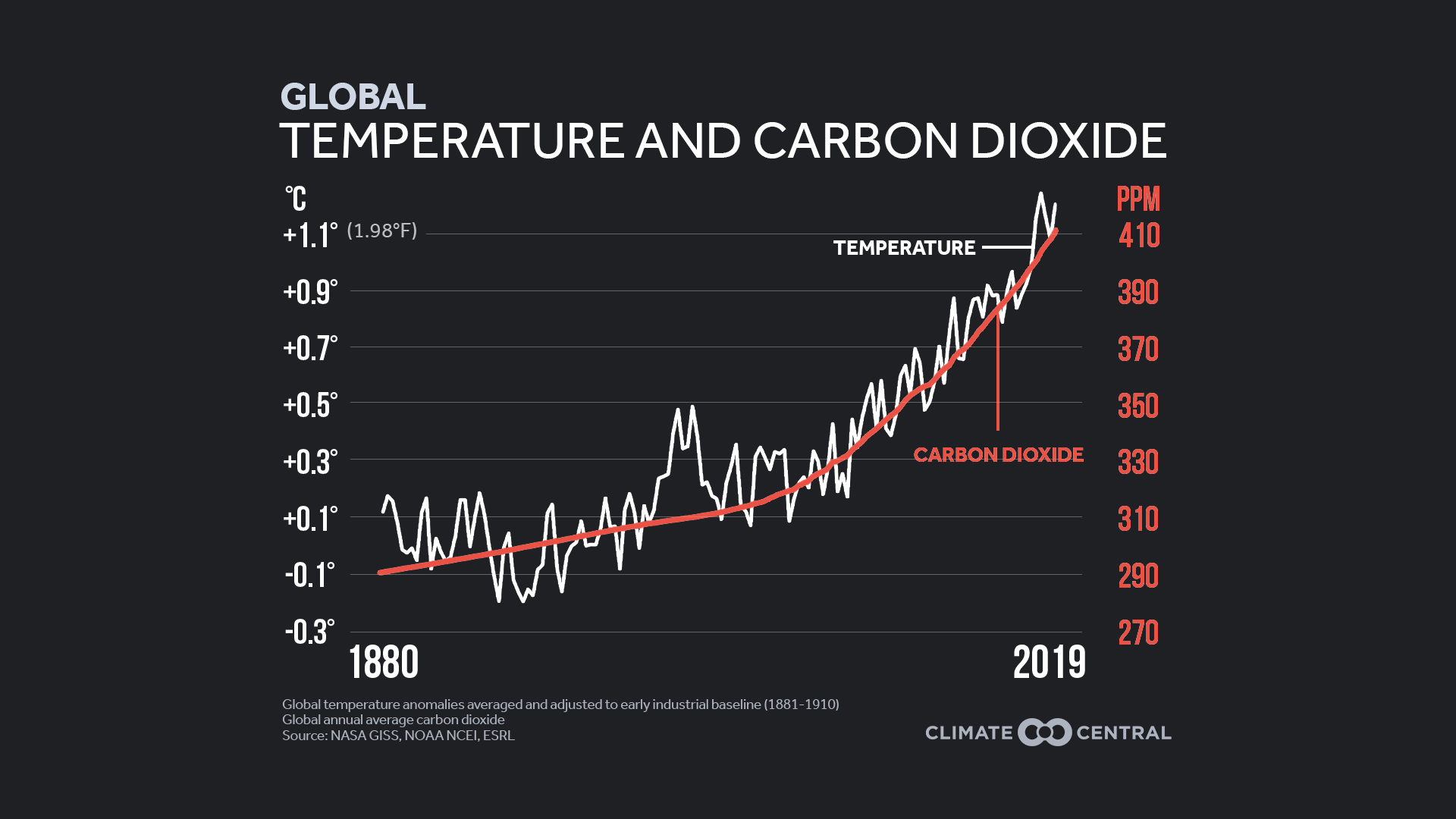 Bending the climate curve won’t be easy. Even with global lockdowns, atmospheric carbon dioxide (CO2) is set to reach its highest level in three million years. Annual emissions of CO2 may fall as much as 8% this year—six times more than they did during the 2008 financial crisis. But this is not a sustainable way to reduce emissions. And as experts from NOAA and Scripps explain, the current drop in emissions has had no visible effect on the overall concentration thus far.

That’s why curbing climate change is such a challenge. Since CO2 stays in the atmosphere for hundreds to thousands of years, net emissions must drop to zero before the concentration will stabilize. If the atmosphere is a plugged-up bathtub, slowing the tap (emissions) doesn’t mean the tub (concentration) will stop filling.

CO2 varies seasonally; the global concentration peaks in May as the Northern Hemisphere’s plants accelerate their use of CO2 to grow. Still, the year-to-year increase is unmistakable—with last month’s peak above 416 ppm. The last time CO2 levels were that high, trees grew near the South Pole and sea levels were 50 to 80 feet higher than today.

It’s not just CO2. Last year, other key greenhouse gases like methane and nitrous oxide also reached record-high modern concentrations. Methane levels are nearly triple the preindustrial amount—a rise that may account for 17% of global warming since then (vs. 66% from CO2). Though methane has a much shorter lifetime in the atmosphere, its heat-trapping potential is 28 times greater than the equivalent CO2 over 100 years. And according to recent research, methane emissions from America’s largest oilfield may be double that of previous estimates.

More heat-trapping gases lead to higher temperatures, bringing the climate change impacts that are affecting us here and now. So far, this year is the world’s second hottest on record—with 2020’s global temperatures nearly 1.5°C (2.7°F) above a preindustrial baseline. While temperatures do vary a bit year-to-year, consistent warming above 1.5°C would bring even greater damage to food and water supplies, coral reefs, and more. Flattening this curve may be the greatest challenge of our time, but solutions do exist. From renewable energy to smarter agriculture to education, major actions today can lower the CO2 levels of the future.

Note: As recent events make clear, air quality is a different story—since most air pollutants come and go much quicker than CO2. We’ll cover this more in the coming weeks.

Scientists and historians have found evidence connecting an unexplained period of extreme cold in ancient Rome with an unlikely source: a massive eruption of Alaska's Okmok volcano, located on the opposite side of the Earth. A new study uses an analysis of tephra (volcanic ash) found in Arctic ice cores ...

Using state-of-the-art ocean robots and scientific sensors attached to seals, researchers have for the first time observed small and energetic ocean currents in the Southern Ocean. The currents are critical at controlling the amount of heat and carbon moving between the ocean and the atmosphere -- information vital for understanding ...

As wildfires flare up across West, research highlights risk of ecological change

Deserts of the US Southwest are extreme habitats for most plants, but, remarkably, microscopic green algae live there that are extraordinarily tolerant of dehydration. After completely drying out, the algae can become active and start photosynthesizing again within seconds of receiving a drop of water. Botanists provide a genetic explanation ...

Half of the world's tropical plant species may struggle to germinate by 2070 because of global warming, a new study predicts.

Characteristics of palm trees differ from those of other tropical trees in many ways. In a major new study ecologists have surveyed the actual numbers of palms in tropical rainforests around the globe. The proportion of palm trees is important to include in calculations of forests' potential carbon storage and ...

Climate change -- from rising temperatures and more severe heavy rain, to drought -- is increasing risks for economies, human security, and conflict globally. Scientists are leading an effort to better assess the climate-conflict link to help societies manage the complex risks of increased violence from a changing climate.

As scientists work to determine why some of the latest climate models suggest the future could be warmer than previously thought, a new study indicates the reason is likely related to challenges simulating the formation and evolution of clouds.

Stress testing 'coral in a box'

Coral death is impacting oceans worldwide as a consequence of climate change. The concern is that corals cannot keep pace with the rate of ocean warming. In particular, because a temperature increase of only one degree Celsius can make the difference between healthy and dying coral reefs. Some corals, however, ...

Climate change leads to longer growing seasons in the Arctic. A new study shows that predators like wolf spiders respond to the changing conditions and have been able to produce two clutches of offspring during the short Arctic summer. The greater number of spiders may influence the food chains in ...

The continuous development and improvement of numerical models for the investigation of the climate system is very expensive and complex. At GEOMAR a new modular system has now been presented, which allows investigations to be carried in a flexible way, with varying levels of complexity. The system, called FOCI (Flexible ...

How to tackle climate change, food security and land degradation

How can some of world's biggest problems -- climate change, food security and land degradation -- be tackled simultaneously? Some lesser-known options, such as integrated water management and increasing the organic content of soil, have fewer trade-offs than many well-known options, such as planting trees, according to a new study. ...

Rising water temperatures could endanger the mating of many fish species

In a new meta-study, experts have published ground-breaking findings on the effects of climate change for fish stock around the globe.

A study documents an invasion happening in the Adirondacks: the black spruce, tamarack, and other boreal species are being overcome by trees normally found in warmer, more temperate forests. Ultimately, researchers predict that these invaders could overtake a variety of northern species, eliminating trees that have long been characteristic of ...

Conservation management around the margins of agriculture fail to protect butterfly species at greatest risk from the intensification of farming, a new study says.

Climate change may cause extreme waves in Arctic

Extreme ocean surface waves with a devastating impact on coastal communities and infrastructure in the Arctic may become larger due to climate change, according to a new study.

Climate change will intensify winds that steer hurricanes north over Texas in the final 25 years of this century, increasing the odds for fast-moving storms like 2008's Ike compared to slow-movers like 2017's Harvey, according to new research.

The New Siberian Islands were the birthplace of the MOSAiC floe: the sea ice in which the research vessel Polarstern is now drifting through the Arctic was formed off the coast of the archipelago, which separates the East Siberian Sea and the Laptev Sea to the north of Siberia, in ...

Texas will face driest conditions of the last 1,000 years

Texas' future climate will feature drier summers and decreasing water supplies for much of the state for the remainder of the 21st century -- likely resulting in the driest conditions the state has endured in the last 1,000 years, according to a team of researchers.

Size matters for bioenergy with carbon capture and storage

New research has shown that Drax power station in North Yorkshire is the optimal site for the carbon capture and storage facilities that will be needed reduce carbon emissions and achieve the targets of 2016 Paris Climate Agreement.

Beavers gnawing away at the permafrost

Alaska's beavers are profiting from climate change, and spreading rapidly. In just a few years' time, they have not only expanded into many tundra regions where they'd never been seen before; they're also building more and more dams in their new homes, creating a host of new water bodies.

Agriculture - a climate villain? Maybe not!

The UN's Intergovernmental Panel on Climate Change (IPCC) claims that agriculture is one of the main sources of greenhouse gases, and is thus by many observers considered as a climate villain.

1.5 billion people will depend on water from mountains

Global water consumption has increased almost fourfold in the past 100 years, and many regions can only meet their water demand thanks to essential contributions from mountain regions. In 30 years, almost a quarter of the world's lowland population will strongly depend on runoff from the mountains. Only sustainable development ...