We rank the average summer temperature and precipitation totals for our Climate Matters markets. We compare all summers in each market’s period of record, and rank them into five equal groups. While some places were cooler this year than in recent summers, they may have still been above average over the entire period of record, as warming trends in recent decades may make what is an above average year seem like a relatively cool summer.

It has been a summer of extremes. Hurricane Harvey became the first major hurricane (Category 3+) to hit the U.S. since Wilma in 2005. It’s only the fourth Category 4+ storm to make landfall in the U.S. since 1970. The others were Hugo (1989), Andrew (1992), and Charley (2004). The final totals on rainfall and damage wrought by this unprecedented storm are yet to be determined, but more than 50 inches of rain fell in parts of southeast Texas. That’s caused 30-foot rises on some of the rivers and bayous in Houston.

Harvey is just the latest extreme weather event to impact the U.S. this summer. The NCEI Climate Extremes Index thus far in 2017 is the third highest it’s been since records began in 1910. From heat waves to downpours, a number of extreme weather phenomena have become more common or severe due to climate change.

This summer, drought was limited in scope but fierce where it existed. The northern Plains and the Pacific Northwest suffered in particular. Seattle endured 55 consecutive days without measurable rain, a record run of dry days. Ironically, a favorably wet spring preceded the summer drought, helping revive spring vegetation. But as the drought settled in, this meant more fuel was available to burn. As a result, fires have scorched more than half a million acres in eastern Montana this summer. Extensive fires in British Columbia sent smoke spewing across the border, blanketing the Northwest off and on all summer. 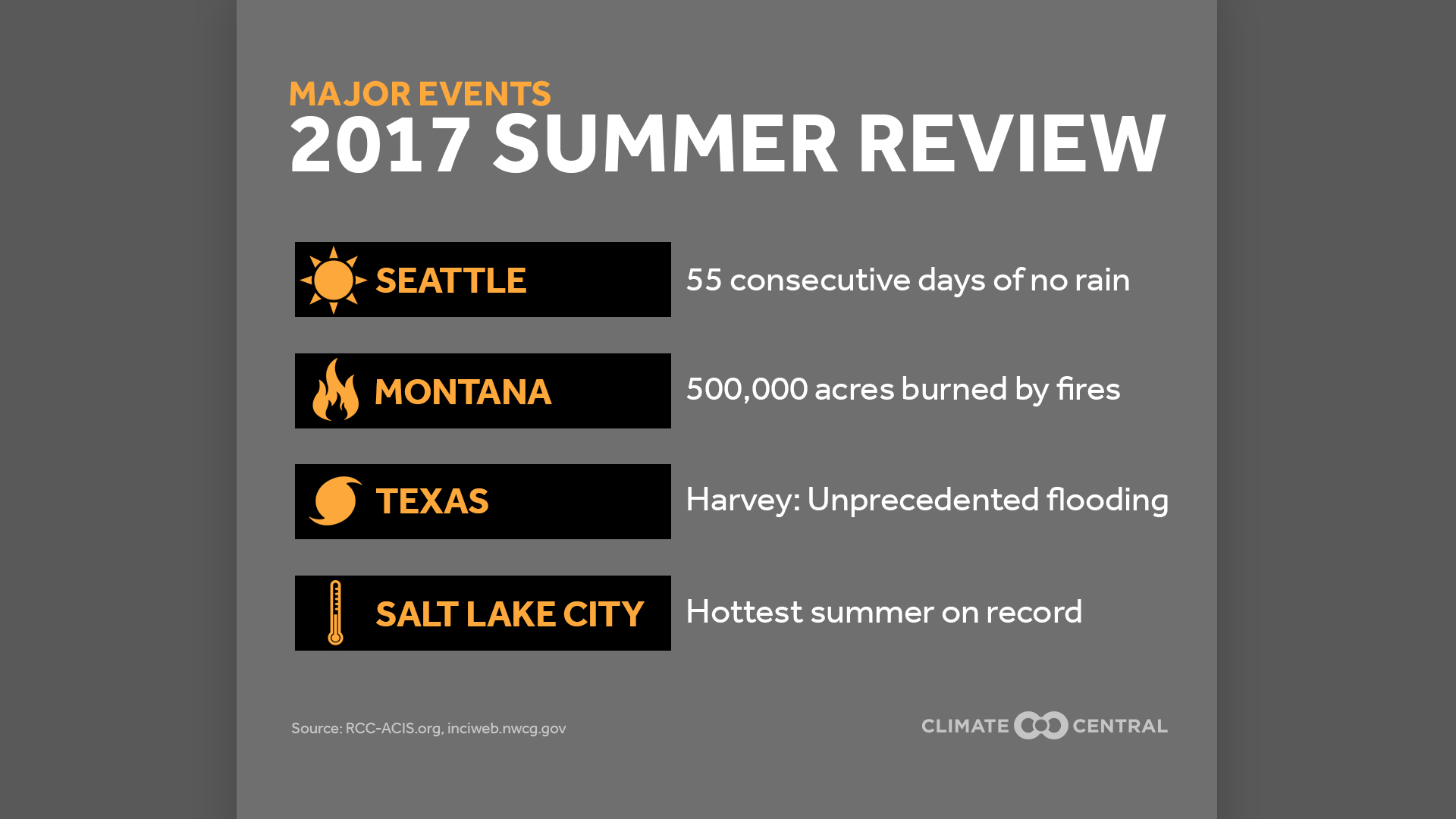 There were not many locations substantially cooler than normal all summer, but those cool places were also generally wetter than normal. Large areas in Alabama, Mississippi, and Louisiana recorded one of their five wettest summers on record. New Orleans had its wettest summer on record, logging 36.8 inches of rain through Tuesday, more than a foot above normal for the summer. The city will see even more rain in the coming days as Harvey swirls near the Gulf Coast. Harvey has already produced record rainfall for many locations along the Texas coast. That includes Houston, which at over 52 inches and counting, is winding down its wettest summer on record.

Temperature and precipitation data were gathered for each market’s period of record during meteorological summer. For this year’s analysis, data was included through Sunday, August 27. Data was ranked and grouped into five equal categories, each representing 20% of the summers in each market’s period of record. We labeled the top 20% of the summers as much above average and the bottom 20% of the years as much below average.